Pollica is known as the landmark in itself, a small Polis, a small town in itself concluded.

Here between the VII and VIII century after Christ, came the Basilian monks and founded its monastery: a
community fleeing from East Byzantine finds its dimension between the cliffs and the paths of this part
of the south. The oldest news on the presence of a settlement dates back to the XII century. It was later
the feud of the Capano princes, then from 1795 of the De’Liguori, until the advent of the Bourbon
domination. 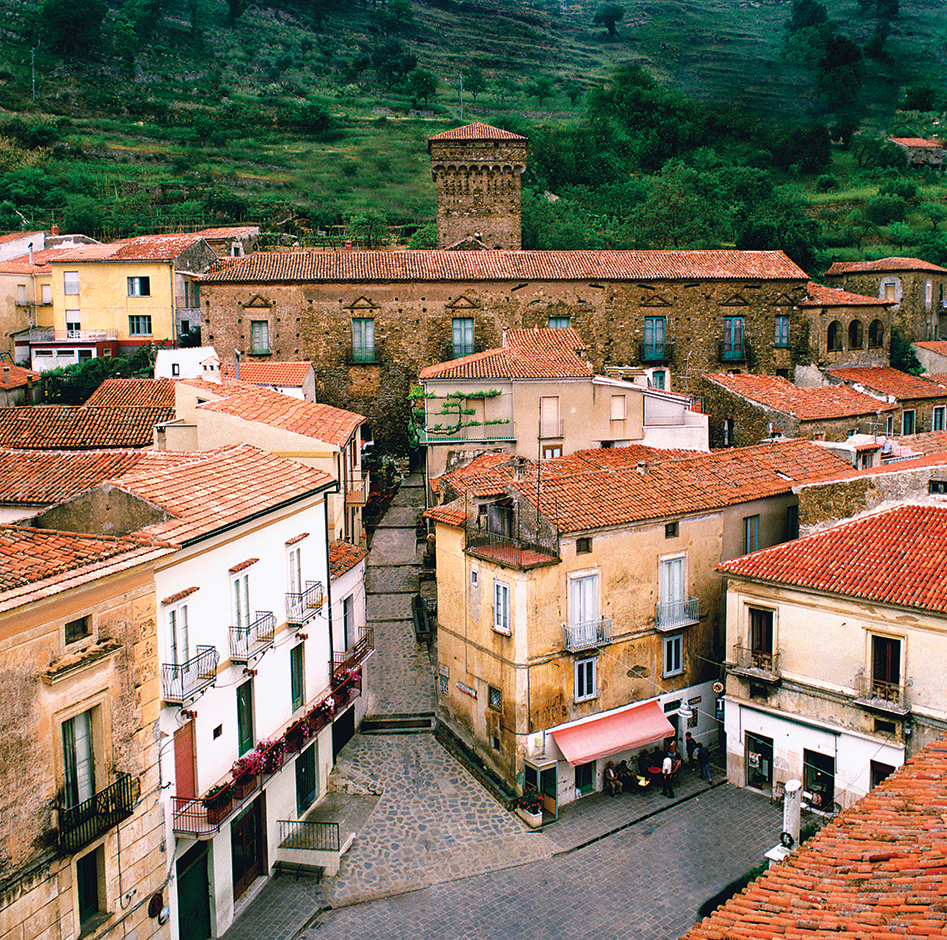 A set of healthy rules of common life inspires the territory management, careful to revitalize
the fabric settlements of terraces Greek-Byzantine and houses in local stone, between bowed fig trees
and olive trees, blue seas always have contacts and contamination, objectified in dietary habits that
have elected the Cilento and Pollica Home of the Mediterranean diet, Intangible Heritage of Humanity
since 2011.

The Castle of the Capano Princes in 1290 was inherited by Guido d'Alment , arrived in Italy
following Charles I d’Angiò, and still today rises over the roofs and the chimneys of the small center of
Pollica , giving it an unmistakable trait. According to the tradition has hosted several times S. Alfonso
Maria de' Liguori, which dedicates a room, but architecture today is the result of the restoration
commissioned in 1610 by Vincenzo Capano. It lights up from the turned corridor that opens onto a large
courtyard, surrounded by service areas: the oil vendor, the oil mill, the guard posts and stables. The first
floor unfolds between wide halls that culminate in a suggestive loggia, repaired by round arches open on
the gulf of Salerno. The imposing tower with a square plan which dominates the landscape stands on
three floors, each with a monofora and the final characteristic dovecote.

In 1997, the Castle was
purchased by the ll , which has restored and intended for cultural purposes, with the location of the Center of Studies of the Mediterranean diet, diet, dedicated to Angelo Vassallo, whose constant work must be
in 2011 the recognition of UNESCO of Intangible Cultural Heritage of Humanity of the Mediterranean diet
and the community of Cilento as emblematic of these cultural heritages. The function of the Center
Studies is to develop policies for the dissemination and diffusion of the Mediterranean Diet
understanding as a style of life, as well as food, as the common heritage of long tradition. In 2013 was
established the Observatory on the Mediterranean diet that will serve as a meeting point of community
emblematic identified by Unesco: in addition to the Cilento, Soria in Spain, Koroni in Greece and
Chefchaouen in Morocco.

Of remarkable value is also the Franciscan Convent of S. Maria delle Grazie, built in 1611, its foundation
were promoted by Prince Vincenzo Capano on the initiative of all citizens of Pollica, who were faced with
all the costs of the construction. A founding element of the cultural identity of the local community, from
1931 the convent has seen gradually their rooms empty of religious people. Today the regent president
,last friar remained, is engaged in a restocking operation of the convent, because returns to be witness to
the religious and social. The municipality of Pollica, interpreting the will of the whole citizenship, is
committed to promoting a valid plan of redevelopment of the site on which rises the structure.

Two of
the paintings of the four altars in the church of the monastery were attributed to the melancholy,
follower of Luca Giordano, while the refined wooden ceiling, by Giuseppe Marrocco by Celso, houses a
painting by Matthew Cilento depicting the assumption. Worthy of note were the wooden choir, organ
and a Grand 18th-century sacristy cupboard with wooden ceiling and a carved stone basin clamshell. Also
the convent is also Franciscan Oasis", inaugurated on 12 July 1959. The celebration more important that
covers the entire Franciscan monastery is the feast in honor of the Madonna delle Grazie that is held
every year on 2 July.

The Church of Saint Peter is the most ancient of Pollica. Built in 1524 was a time public oratory of
patronage of the family Pepper. In a small church , currently deconsecrate, you can admire the family
coat of arms on the gate of entrance and inside in the central nave, a beautiful altar in polychrome
marble and a holy water fountain stone made.